Fabiana Chagas joined eARTh Studios in January 2018, and brings a love of clay with her! It has been amazing to work alongside Fabiana in the studio and I have found myself deeply appreciative of her skill with both clay as a medium and the people she has assisted in Open Studio and in our Workshops.

Her brief Bio:
For Fabiana, pottery is a milestone steering her towards a life of art and nature. Having worked as a lawyer for 17 years, she felt as if something was missing in her life.

Early in 2015, she began taking ceramics classes. Just one year later she has found herself totally immersed in the world of arts and with such assurance that she moved to Canada to enter into the two year ceramic studio program at Kootenay School of Arts. 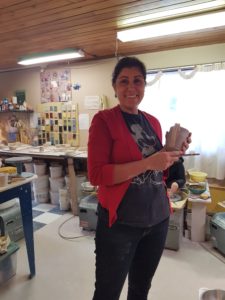 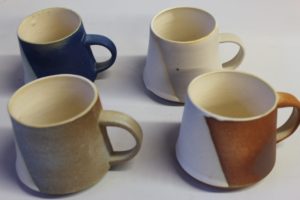 Her body of work reflects the many influences she have had over the years of her training. The result is a line of functional artworks that are intended for daily use in the kitchen and home. Her work was primarily wheel thrown with stoneware clay and she glazes with rich vibrant colors, but now she is also involved with some slip casting pottery. In this process she is applying liquid porcelain into plaster molds to obtain a thin wall and translucent piece.